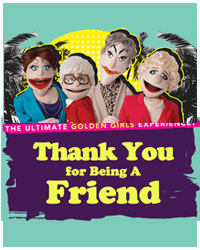 Thank You for Being a Friend

× Prepare for an evening of laughter, spectacular put-downs and familiar friends as Miami's four favourite Golden Girls -Dorothy, Sophia, Rose and Blanche-reunite in puppet-form for this lovingly hilarious live tribute show! Thank YouFor Being a Friendis the ultimate Golden Girls experience, delivering all the classic dialogue, razor sharp gags and taboo-breaking stories you'd expect! As a wonderful introduction to the joy of the hit television series for first timers, it'll have the uninitiated rolling in the aisles, while die-hard fans fondly remember the brilliance of The Golden Girls!