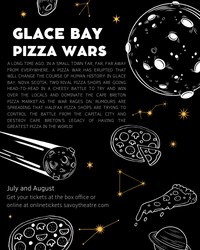 A long time ago, in a small town far, far, far away from everywhere, a pizza war has erupted that will change the course of human history! In Glace Bay, Nova Scotia, two rival pizza shops are going head-to-head in a cheesy battle to try and win over the locals and dominate the Cape Breton pizza market. However, as the war rages on, rumours are spreading that Halifax pizza shops are trying to control the battle from the capital city and destroy Cape Breton’s legacy of having the greatest pizza in the world!