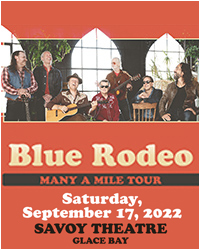 It’s a bittersweet truth to admit, but were it not for dreadful, awful COVID-19, there might not have been Many A Mile, Blue Rodeo’s superb new 16th studio album. For all sorts of reasons both complex and mundane, the band’s collective will torecord againafter 2016’s 1000 Armshad dimmedand a future studio album seemed unlikely. Yet the pandemic, despite the horror and chaos it visited upon the globe, also bestowed upon Blue Rodeo co-singer/songwriters Jim Cuddy and Greg Keelor, something they had long since sacrificed as always in-demand working musicians: time. That proved to be the magic elixir. For Cuddy, time meant being able to “sculpt” his songs without deadlines while watching an entire season quietly unfold from a fixed vantage point at hisfarmnorth of hometown Toronto. For Keelor at his home in Northumberland outside Toronto, time meant being able to rest and heal the grisly tinnitus that has plagued him for decades.